The previous release has lead to a big amount of telephone calls and letters from regular readers of our column.

It turned out that many readers are interested in suppositions that answer the following questions:

How exactly will machinery look tomorrow?

How will the new machines be arranged?

How can it change the existence of other machines?

What types of business cab this lead to?

What hazards can appear?

This is the list of questions that I have been asked.

As an experiment we decided to publish a text that would answer at least some of them.

However, to make a supposition an investigation should be made which we did in a non-aggressive manner as a sketch about the phenomenon of technology transfer in the history of evolutionary relationship between computers and musical instruments.

Perhaps such investigation can be called a trial analysis of “technological genetics”.

There is no such science at the moment. It is yet called “function-oriented search” (publication list can be found here) and is an important tool in modern innovative arts that we have already told about.

So allow us to conduct a public experiment in transferology – a future science about the features of technology transfer processes and in case you like it please leave your vote at our forum.

Have a nice time reading,

where do computers come from? 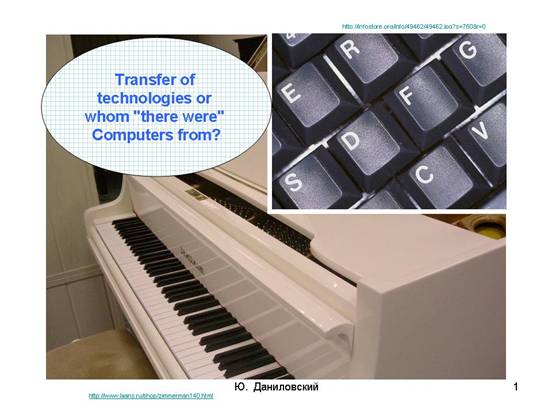 Computer as a “family album

Computers have many “relatives”, such as: calculators, slide rulers, etc. but these are “direct relatives”. The question is who are “cousins” and “second cousins” of the most “aggressive” engineering system of the previous and the current century?

How many parts does a computer have?

All modern computers consist of 5 main parts with different features.

In fact a computer is a complex system of 5 devices that were adopted from different pertinent arts at different times.

For example a monitor, that has two assignments in our functional model of a computer is a well known TV-set, either CRT or LCD.

Printer is certainly a typewriter that has evolved in ink-jet and laser modifications which are adopted form semi-conductor science and printer industry.

A keyboard is also an adoption from typewriters and keyboard instruments. This stating can be put to doubt but the “relationship” between musical instruments and computers can be easily illustrated by examples of technology transfer between these fields of knowledge both in direct and in reverse directions.

In previous articles we have repeatedly mentioned that machine-unification process has two directions and has additivity violations. Computers are not an exception.

We will first consider the “computers -> musical instruments” direction.

Recently a piece of news has appeared that a new entertaining device was developed and cost $200 – a Virtual piano.

This “optical piano” is result of a direct transfer of a virtual-keyboard technology that was developed in 2002 by an Israeli company VKB. 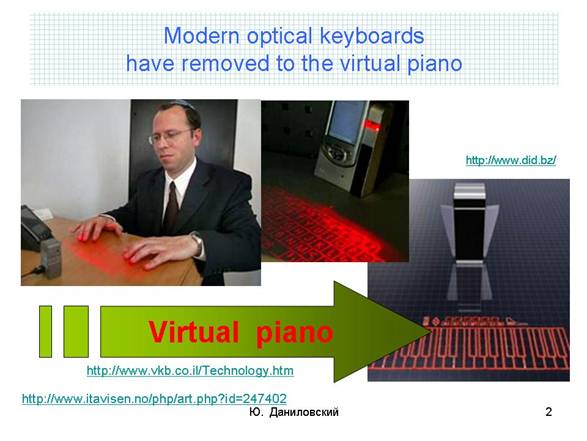 A musician can carry this portable device which projects a piano keyboard on any flat surface and by connecting this device to a computer via USB music pieces can be played. Thus the functional resemblance and sameness in use of piano and computer input devices, allow to “transfer” this product from one field (computers) to another (musical instruments).

Let us trace this phenomenon of technology transfer from computing to musical instruments.

The Live Science magazine tells us that even in Ancient Greece there were “computers” that could calculate moon phases, predict eclipse dates and determine positions of the five planets known at that time. 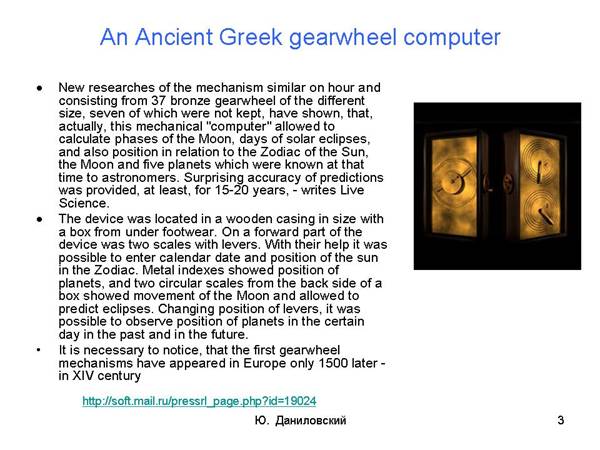 That mechanism consisted of 37 brass gears and fitted in a small wooden box no bigger than a modern suitcase. 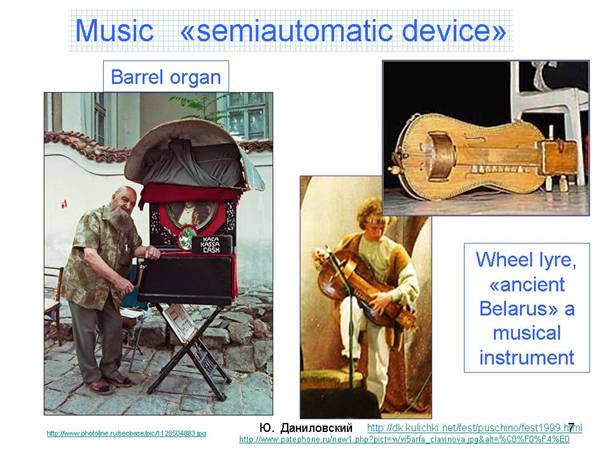 Although an inverse proposition is true: we can say that “semiautomatic musical devices” such as music boxes, barrel organs were sources of technologies that were transferred to computing devices.

More than 2000 years ago computing devices based on gears did exist, but it is hard to say that there was a “technology transfer” from computing devices to musical instruments. Probably it is the other way around: “musical devices” such as music boxes and barrel organs were sources of technologies that were transferred to aid the development of computing devices.

Let’s take a detailed look at this situation taking into account that the modern term “technology transfer” mostly means a purposeful use of an engineering solution from one field in another, but in history these transfers were mostly incident.

In most cases technical historians don’t know whether this technology transfer was incident or committed that is why we think it’s reasonable to use the theory of Ludwig Boltzmann – the founder of statistical physics. This theory says that “accident is an ill-researched regularity”. The following examples make the same sense as this theory.

A computer even a mechanical one is impossible without a data storage system. In the above-described Greek computer the gears had the data in them – their size and number of edges on them.

In 1822 punched cards were used in an analytical machine made by Charles Babbage. These cards were of two types: small ones (5.5x13 cm) used for control and big ones (7x18,5 cm) – to store numbers. Then, in 1890 Herman Hollerith has patented a tabulator. This mechanical computer was far from modern machines and was created for counting votes as a special order of USA government.

Punched cards of Charles Babbage and Herman Hollerith weren’t a pioneer invention – they were a result of a technology transfer from textile industry to computing machines. 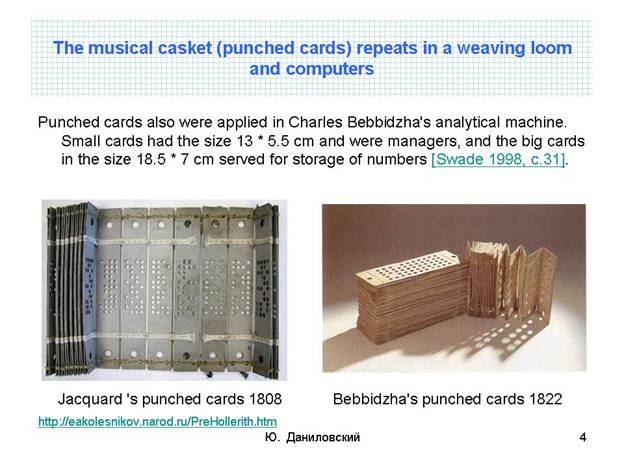 In 1812 – the year of the Borodino battle due to Napoleons support over 18 000 machines were used. But even he wasn’t a pioneer. There were machines if Basile Bouchon in 1725 and machines with punched tapes in 1728 made by Jean-Batiste Falcone.

However even this step of technical evolution can’t be called a pioneer one as music boxes with punched cards in forms of discs – metal circles with holes were known in Europe at least since 17th century. 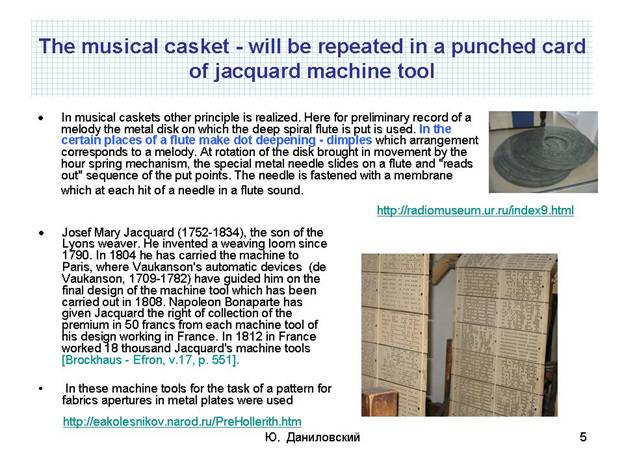 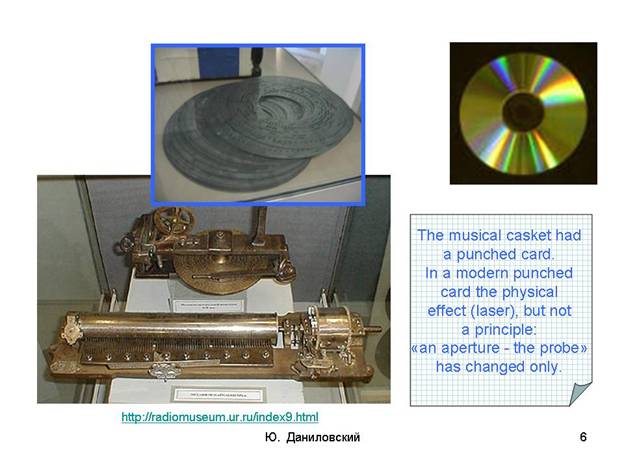 Around the same time a more advanced model of a music box appeared – a wheel harp. 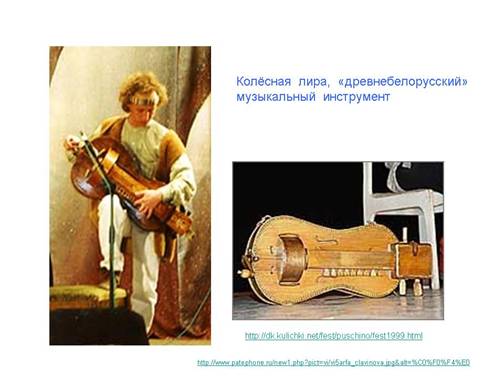 This musical instrument differs from the ones we are used to, a guitar for example, having all melodies and cords stored in a compact mechanical way on special carriers.

A musician only needs to “press the button” and the corresponding melody will be played as he will rotate the handle of the harp with his right hand. The left hand is for operating with the input system, a keyboard you might say.

A curious sequence of adoptions can be seen: a music box – a machine for making carpets – a machine for counting votes – devices for data storage and input for lamp computers with the use of punched cards – magnetic memory – optical memory.

Surprising, but CD (as well as DVD) operation principles are based on objects that are just like the “holes” and “pins” in music boxes. 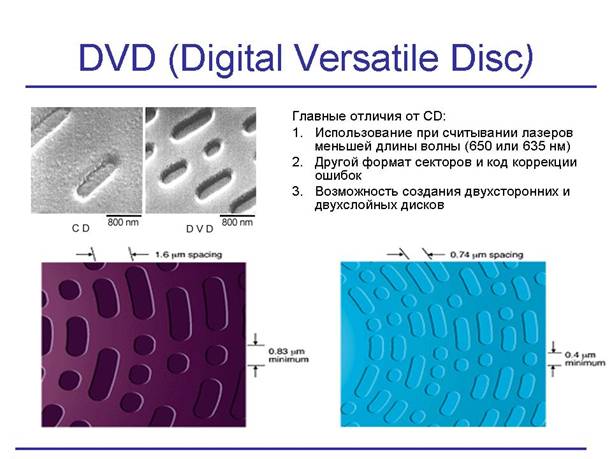 The difference is only in the scale of these holes – nano-sizes in CDs (DVDs) and instead of a pin there is a laser beam.

The wavelengths decreased to increase data storage density from “red” then to “green” and then to “blue”. However at this approach we have to find the answer to the question “What was before music boxes?”.

The idea of storing information on a “pin-hole” system in very old. According to the books of Alexander and Anna Lavrousse the first locks or “protolocks” were perfect systems to keep secrets in Ancient Egypt and precisely in ancient Sumerian State. 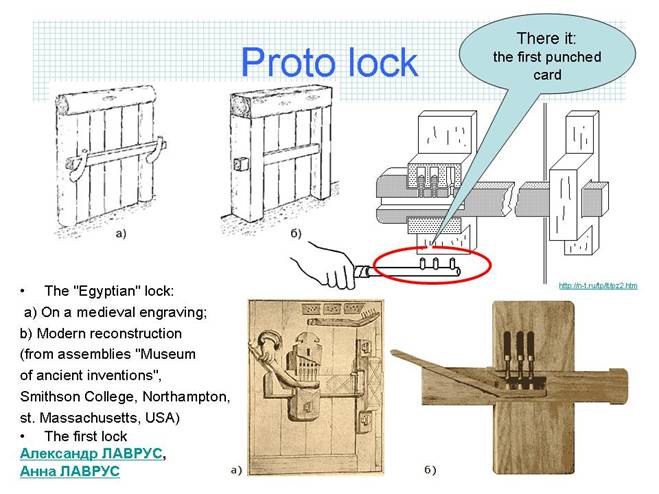 The need for security has always existed as well as the need for entertainment. Same authors say that “more than a half of modern puzzles are ancestors of modern locks. Rings, figure plates with cuts, bars with headbands – they weren’t toys in the old days”. 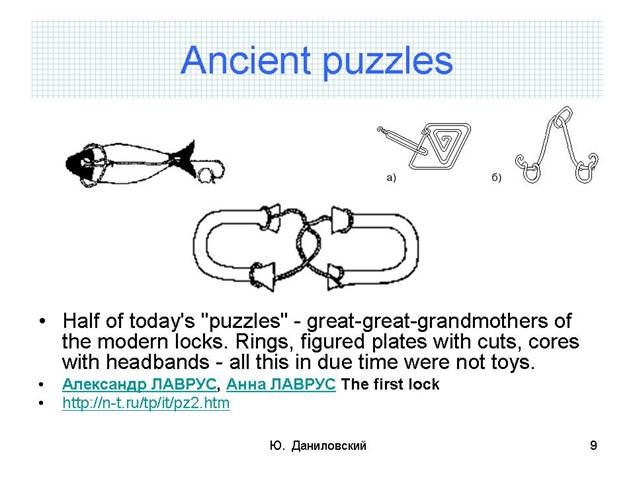 All these inventions were made for protecting home from stranger in the first place but after the invention of the “pin-hole” (key-keyhole) system they became a sort of entertainment. Many popular (at old times) machines became toys and many modern things were developed on the base of toys.

For example a helicopter (an aero dynamical machine developed by Lomonosov) or a steam machine.

The above story of an “export” of the idea of storing data using a “pin-hole” system becomes obvious if we display it graphically in a form of a road-map. 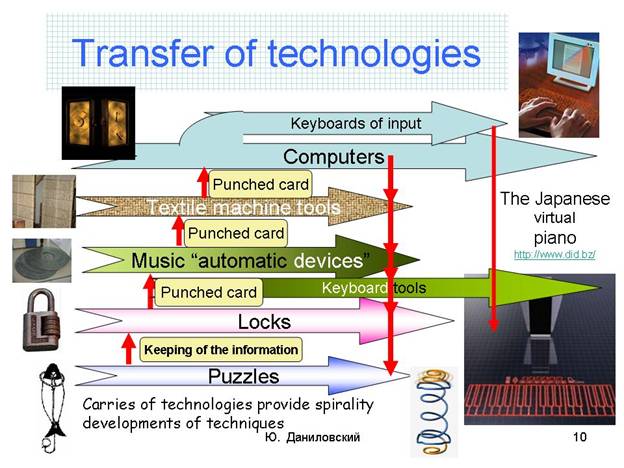 Technology transfer scheme that is shown on this figure is not complete of course because only 2 of 5 main computer parts are observed: input devices and data-storage devices.

Door locks based on the “pin-hole” system can be called the most distant relatives of computers along the data-storage line. Usual door locks have the same operating principles as means of data storage such as CDs and DVDs. The only difference is that a door lock stores only one binary combination and a CD or a DVD store a huge number of these combinations.

The “pin-hole” (or a binary 0/1) principle has passed to music boxes (17th century) then to textile machines (1725-1809) then to Babbages analytical machine (1822), to Holleriths tabulator (1890) and after that for almost 60 years was applied in an input device on the base of punched cards. In 1952 the well-known IBM corporation used a tape recorder in a computer IBM model 701. 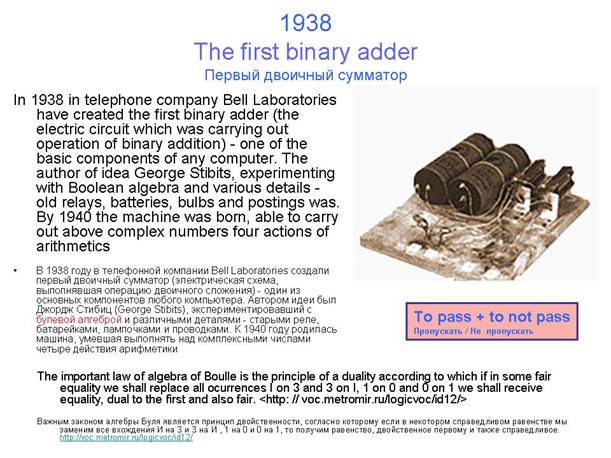 A tape recorder was invented in 1898 by Valdemar Poulsen as an extension of an idea first presented in 1888 by an American scientist Overling Smith.

The most interesting thing in that all this uptake of different machines by a computer (we can use this model in technology transfer processes using a logical approach) is accompanied by a response process: “emission process” or a “return process”.

Not only did computer “return” a keyboard back to musical instruments, but it also integrated in different modifications of composers keyboard- or string-based. Common hi-fi systems, TV-sets, locks and various puzzles with integrated computers are technical descendants of door locks.

A figure that illustrates a two-way technology transfer process looks more like one from a school natural science textbook – “a hydrologic cycle”. The binary data storage principle (0/1) first “rose to the clouds” (to computers) there it has “condensed” and “rained” afterwards on it’s original sources.

We are describing this effect in a literate manner but there is no problem in building mathematical models on this basis that will describe the spiral phenomenon in technical development in which technology transport is vital.

As a conclusion we can take a look at the figure below. 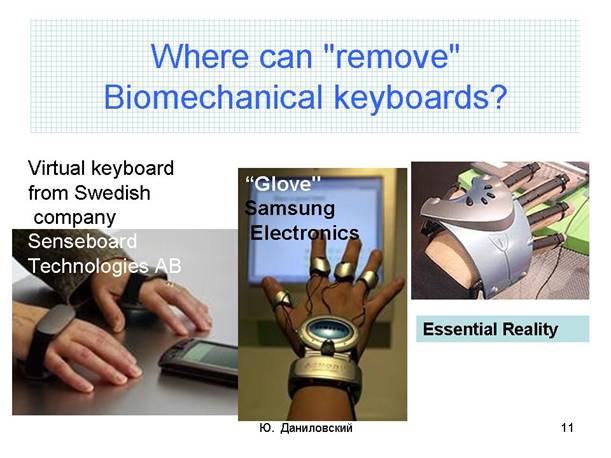 Here we can see pictures of new versions of keyboards. One can ask: “in what musical instrument can we use these?”

Our answer is that it can be a new version of a therminevox. 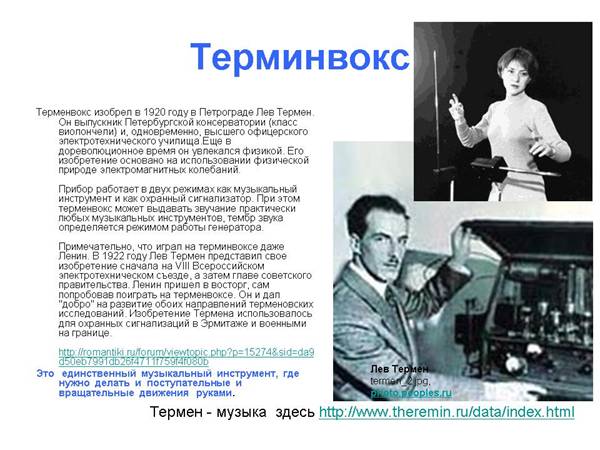 You can listen to “thermine music here”

This fantastic musical instrument was invented in 1920 by a Russian physician (as well as a musician in piano, because he studied in a conservatoire as well as in Petrograd Polytechnical Institute). This instrument is played by shifting hands along a vertical bar. Even Vladimir Lenin liked this instrument a lot and asked the young inventor to go on a musical tour in USA to earn some money for the young soviet republic. This is what Lev Thermin actually did, but this is another story.

New keyboards allow to play a melody even with our hands in our pockets. And applying this musical technology to legs and feet we can create new musical tendencies for example “an electromagnetic ballet”. It can be used in schools, discos, competitions, TV and internet projects, education of any sort, etc. We think that this solution has a lot of “technology development attractors”.

Be quick! This idea is not patented yet. We give it to you as a present.

Each of you can easily organize production and sales on its base. Because you won’t be able to get rich only “inventing technical solutions” but of course you won’t get rich with inventing something.

We will talk about this in our next issues.